Art fairs of the calibre of Art Basel Hong Kong offer a unique yearly opportunity to catch an overview of the worldwide art market and its interests. However, fairs at this heady level rarely capture the world’s other concerns, such current issues as the rise of populism, Donald Trump and his policies, regional tensions, intolerance to refugees, terrorism, Brexit and a possible European Union break-up: none of these were much glimpsed around Art Basel’s exhibition halls. Art Central, located in a large tent on the Central reclamation, had fewer pretensions and the art, although much of it decorative, saw small glimpses of political and social concern in their organized talks and performances. This is one reason to be skeptical of the over-quoted ‘Hong Kong art week’ or ‘art month’ label freely associated with this busy time of the year. Hong Kong has great exhibitions throughout the year, and over this longer timeframe artists’ immediate concerns are seen in a variety of galleries and artist-run spaces to reflect a more nuanced political and social awareness than in the tight mercantile atmosphere of an art fair.

At Art Basel, Asia Art Archive strove to display one source of artistic endeavour. One hundred artists were asked to name a book that was an inspiration for their art work. Philosophy and art theory led the choices. However, South Korean artists Young-Hae Chang Heavy Industries are tongue-in-cheek within the art fair’s whirlwind atmosphere; they nominated Dale Carnegie’s How to Win Friends & Influence People. They realized that all the qualities Carnegie identified to be successful, “being positive, pleasant, conversational, and agreeable”, were those they did not have, and “that’s when it hit us that we had all the failings – sorry, qualities – necessary for the life of the artist.” Similarly, Hong Kong artist Leung Mee Ping chose a book of cartoons by the Shanghai cartoonist Feng Zikai, whose simplicity in technique and humanism “are minimalist subtractions; which is why I often ask, ‘What do I not want?’” Leung’s all-embracing question is a perfect reflection in an art fair.

The book and literary theme continued throughout the art fair. At Goodman Gallery, South African William Kentridge’s short stop-animation video Soft Dictionary saw him flipping through an old dictionary on which his characteristic hand-written text and drawings, word plays (“slaughter” morphs a few pages later to “laughter”; likewise “s/mother”). Images of African dictators come and go, significant dates noted, Mao and Deng Xiaoping appear. The video is a 2mins 44second summary of the significant influence of 1960s Maoist revolution in Africa; now replaced by the soft power of Chinese investment.

At Mind Set Art Center’s booth Taiwan artist Jin-Hua Shi’s impressive The 100 kilometre Walk showed two 10 metre long canvases. On one canvas he drew, back and forth, 100 kilometres of pencil lines; resulting in a dense and luminously layered durational drawing. He walked over the other canvas and the resulting fine graphite particles as he drew were ‘caught’ by his shoes and organically worked into that canvas. The two canvases, completed between 2012-2017, were presented with a jar of used pencil stubs, a video, a framed artist statement and the worn shoes. Likewise, in Gallery Exit, Kong Chun Hei’s Stuff XI is a carefully copied ink drawing of a large piece of crumpled paper, but stronger is the impression – captured like a  photograph – of not just the wrinkled paper but the endurance of artistic effort. 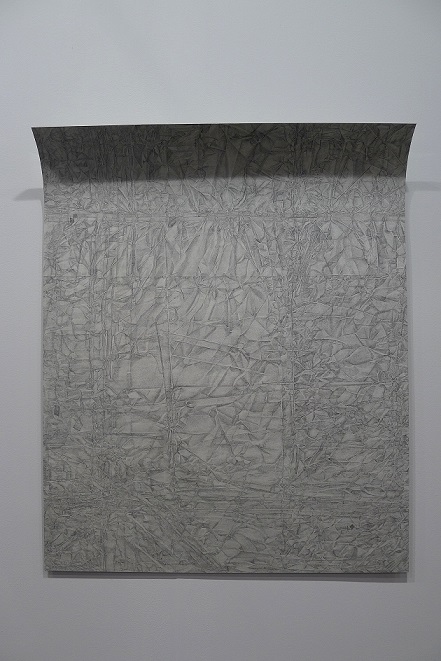 American artist Barbara Kruger has long depicted our materialist and self obsessions. Her Untitled (Project for Dazed and Confused) at Sprüth Magers reflected the glossy printed matter always found at art fairs with an image of a male artist looking through a magnifying glass with Kruger’s characteristically ironic text: “I’m creative. I’m the next big thing. That’s why I’m in this magazine, right? I’m a really cute artist. Well…maybe more compelling than cute. No…probably more provocative than compelling. No…maybe more extraordinary than provocative….”

Back at Art Basel, Sundaram Tagore Gallery showed Singaporean Jane Lee’s paintings of violently syringed, dripped and spread slashes of paint. Impossibly thick, the canvases are specially shaped to give an impression of great paint thickness. They are hypnotically chaotic and wonderfully messy – the paint wanting to ooze out of the confines of the stretched canvas, the gallery booth and out of the art fair. Taipei’s TKG+ showed Joyce Ho’s excellent videos, kinetic sculpture and mixed media work that complemented her installation in the public section of the fair.

Photography was not as prominent this year, but Hikosaka Naoyoshi’s photographic documentation of his 1970 latex-paint pouring performance Floor Event No. 1 shown at the booth of Misa Shin Gallery was a fascinating slice of significant performance history. Hikosaka poured latex over the tatami floor of his apartment and continued to live there over the following ten days as it dried. These photographs document this original performance, which was repeated in other settings during the 1970s.

As people leave Art Basel, they pass the Trade Development Council’s Design Shop in whose windows are a series of photographs entitled ‘Stylish Hong Kong’ (with such captions as “High-level view of Hong Kong from Prince’s Building”). Reality hits a few steps further: the doors to Immigration Tower are closed and a line of sitting domestic helpers start to queue for the overnight wait to secure a next-day immigration appointment. With a blink of the eye, they could Syrian refugees, or from anywhere, awaiting an asylum interview.

Fortunately, artists can be critically cutting of themselves and the illusion of pretension, promotion, marketing, advertising – all that an art fair embraces – and that we all inhabit alongside the stark realities of life. On another panel of Barbara Kruger’s Untitled she cuts to the core: “I’m very serious. I’m brilliant and beautiful. Too beautiful for you. I’m looking into the distance, away from you. I’m thinking important thoughts. Things you can’t quite grasp. Someday, you’ll understand.”